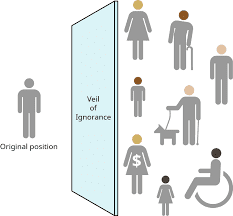 The philosopher John Rawls aimed to identify fair governing principles by imagining people choosing their principles from behind a “veil of ignorance,” without knowing their places in the social order. Across 7 experiments with over 6,000 participants, we show that veil-of-ignorance reasoning leads to choices that favor the greater good. Veil-of-ignorance reasoning makes people more likely to donate to a more effective charity and to favor saving more lives in a bioethical dilemma. It also addresses the social dilemma of autonomous vehicles (AVs), aligning abstract approval of utilitarian AVs (which minimize total harm) with support for a utilitarian AV policy. These studies indicate that veil-of-ignorance reasoning may be used to promote decision making that is more impartial and socially beneficial.