What Einstein meant by ‘God does not play dice’ 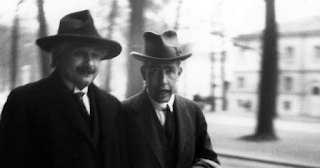 But Einstein’s was a God of philosophy, not religion. When asked many years later whether he believed in God, he replied: ‘I believe in Spinoza’s God, who reveals himself in the lawful harmony of all that exists, but not in a God who concerns himself with the fate and the doings of mankind.’ Baruch Spinoza, a contemporary of Isaac Newton and Gottfried Leibniz, had conceived of God as identical with nature. For this, he was considered a dangerous heretic, and was excommunicated from the Jewish community in Amsterdam.

Einstein’s God is infinitely superior but impersonal and intangible, subtle but not malicious. He is also firmly determinist. As far as Einstein was concerned, God’s ‘lawful harmony’ is established throughout the cosmos by strict adherence to the physical principles of cause and effect. Thus, there is no room in Einstein’s philosophy for free will: ‘Everything is determined, the beginning as well as the end, by forces over which we have no control … we all dance to a mysterious tune, intoned in the distance by an invisible player.’

The special and general theories of relativity provided a radical new way of conceiving of space and time and their active interactions with matter and energy. These theories are entirely consistent with the ‘lawful harmony’ established by Einstein’s God. But the new theory of quantum mechanics, which Einstein had also helped to found in 1905, was telling a different story. Quantum mechanics is about interactions involving matter and radiation, at the scale of atoms and molecules, set against a passive background of space and time.