Can Physicians Work in US Immigration Detention Facilities While Upholding Their Hippocratic Oath? 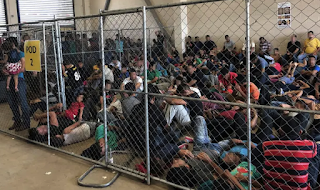 The modern successor to the Hippocratic oath, called the Declaration of Geneva, was updated and approved by the World Medical Association in 2017. The pledge states that “The health and well-being of my patient will be my first consideration” and “I will not use my medical knowledge to violate human rights and civil liberties, even under threat.” Can a physician work in US immigration detention facilities while upholding this pledge?

There is a humanitarian emergency at the US-Mexico border where migrants, including families, adults, or unaccompanied children, are detained and processed by the Department of Homeland Security’s (DHS) Customs and Border Patrol and are held in overcrowded and unsanitary conditions with insufficient medical care.2 Children (persons <18 years), without their parents or guardians, are often being detained in these detention facilities beyond the 72 hours allowed under federal law. Adults and children with a parent or legal guardian are then transferred from Customs and Border Patrol facilities to DHS’ Immigration and Customs Enforcement facilities, which are also overcrowded and where existing standards for conditions of confinement are often not met. Unaccompanied minors are transferred from Customs and Border Patrol detention facilities to Health and Human Services (HHS) facilities run by the Office of Refugee Resettlement (ORR). The majority of these unaccompanied children are then released to the care of community sponsors, while others stay, sometimes for months.

Children should not be detained for immigration reasons at all, according to numerous professional associations, including the American Academy of Pediatrics.3 Detention of children has been associated with increased physical and psychological illness, including posttraumatic stress disorder, as well as developmental delay and subsequent problems in school.

Given the psychological and physical harm to children who are detained, the United Nations Committee on the Rights of the Child stated that the detention of a child “cannot be justified solely on the basis of the child being unaccompanied or separated, or on their migratory or residence status, or lack thereof,” and should in any event only be used “…as a measure of last resort and for the shortest appropriate period of time.”6 The United States is the only country not to have ratified the convention on the Rights of the Child, but the international standard is so widely recognized that it should still apply. Children held in immigration detention should be released into settings where they are safe, protected, and can thrive.