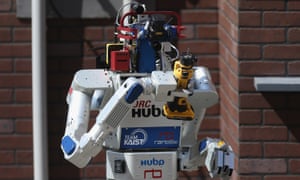 Wanted: military “ethicist”. Skills: data crunching, machine learning, killer robots. Must have: cool head, moral compass and the will to say no to generals, scientists and even presidents.

The Pentagon is looking for the right person to help it navigate the morally murky waters of artificial intelligence (AI), billed as the battlefield of the 21st century.

“One of the positions we are going to fill will be someone who’s not just looking at technical standards, but who’s an ethicist,” Lt Gen Jack Shanahan, director of the Joint Artificial Intelligence Center (JAIC) at the US defense department, told reporters last week.

“I think that’s a very important point that we would not have thought about this a year ago, I’ll be honest with you. In Maven [a pilot AI machine learning project], these questions really did not rise to the surface every day, because it was really still humans looking at object detection, classification and tracking. There were no weapons involved in that.”

Shanahan added: “So we are going to bring in someone who will have a deep background in ethics and then, with the lawyers within the department, we’ll be looking at how do we actually bake this into the future of the Department of Defense.”

The JAIC is a year old and has 60 employees. Its budget last year was $93m; this year’s request was $268m. Its focus comes amid fears that China has gained an early advantage in the global race to explore AI’s military potential, including for command and control and autonomous weapons.