Reasons or Rationalisations: The Role of Principles in the Moral Dumbfounding Paradigm 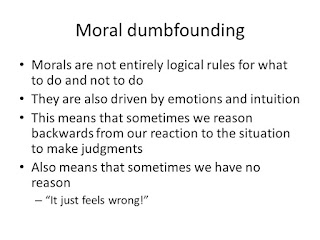 Moral dumbfounding occurs when people maintain a moral judgment even though they cannot provide reasons for it. Recently, questions have been raised about whether dumbfounding is a real phenomenon. Two reasons have been proposed as guiding the judgments of dumbfounded participants: harm-based reasons (believing an action may cause harm) or norm-based reasons (breaking a moral norm is inherently wrong). Participants who endorsed either reason were excluded from analysis, and instances of moral dumbfounding seemingly reduced to non-significance. We argue that endorsing a reason is not sufficient evidence that a judgment is grounded in that reason. Stronger evidence should additionally account for (a) articulating a given reason, and (b) consistently applying the reason in different situations. Building on this, we develop revised exclusion criteria across 2 studies. Study 1 included an open-ended response option immediately after the presentation of a moral scenario. Responses were coded for mention of harm-based or norm-based reasons. Participants were excluded from analysis if they both articulated and endorsed a given reason. Using these revised criteria for exclusion, we found evidence for dumbfounding, as measured by the selecting of an admission of not having reasons. Study 2 included a further three questions assessing the consistency with which people apply harm-based reasons. As predicted, few participants consistently applied, articulated, and endorsed harm-based reasons, and evidence for dumbfounding was found.