Americans Have Shifted Dramatically on What Values Matter Most 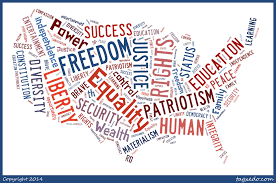 The values that Americans say define the national character are changing, as younger generations rate patriotism, religion and having children as less important to them than did young people two decades ago, a new Wall Street Journal/NBC News survey finds.

The poll is the latest sign of difficulties the 2020 presidential candidates will likely face in crafting a unifying message for a country divided over personal principles and views of an increasingly diverse society.

When the Journal/NBC News survey asked Americans 21 years ago to say which values were most important to them, strong majorities picked the principles of hard work, patriotism, commitment to religion and the goal of having children.

Today, hard work remains atop the list, but the shares of Americans listing the other three values have fallen substantially, driven by changing priorities of people under age 50.

Views varied sharply by age. Among people 55 and older, for example, nearly 80% said patriotism was very important, compared with 42% of those ages 18-38—the millennial generation and older members of Gen-Z.

Two-thirds of the older group cited religion as very important, compared with fewer than one-third of the younger group.

“There’s an emerging America where issues like children, religion and patriotism are far less important. And in America, it’s the emerging generation that calls the shots about where the country is headed,” said Republican pollster Bill McInturff, who conducted the survey with Democratic pollster Jeff Horwitt.