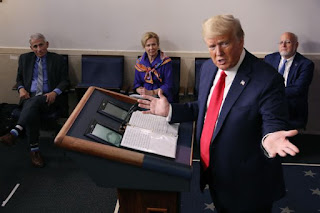 The principal argument the President has used in support of hydroxychloroquine is the rhetorical statement: “What do we have to lose?” (He repeated that phrase five times at his Saturday media briefing.) “I’m not a doctor but I have common sense,” Mr. Trump added.

“Common sense” is not evidence. And “what have we got to lose?” is certainly no way to practise medicine – or policy-making for that matter.

Physicians in China started using hydroxychloroquine to treat COVID-19 patients early in the pandemic. There was certainly some logic to this move. The drug has antiviral properties and showed some promise in vitro but that doesn’t mean it will work in vivo.

It remains a desperation drug, something to try when the rest of the very limited armamentarium has been exhausted.

The evidence of benefit in patients is mostly anecdotal, based on highly publicized but scientifically weak studies. Controversial microbiologist Didier Raoult has made wild claims about the effectiveness of hydroxychloroquine but his study, published in the International Journal of Antimicrobial Agents, is little more than anecdotal.

Similarly, Vladimir Zelenko, a small-town doctor in New York State, has gained internet fame promoting a cocktail of three drugs – hydroxychloroquine, the antibiotic azithromycin and zinc sulphate. There is no real evidence for claims that he has cured hundreds of cases of COVID-19, but that hasn’t stopped Mr. Trump from promoting the regimen.

There needs to be proper studies done, with control groups – meaning one group gets the drug(s) and the other does not, and the outcomes are compared. Like it or not, that takes time.

Impatience is not an excuse to make unsubstantiated claims.