How Trump failed the biggest test of his life 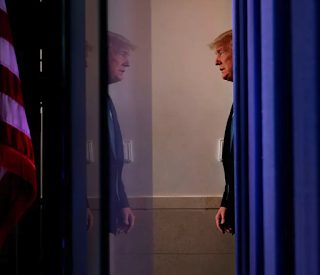 Those missing four to six weeks are likely to go down in the definitive history as a cautionary tale of the potentially devastating consequences of failed political leadership. Today, 86,012 cases have been confirmed across the US, pushing the nation to the top of the world’s coronavirus league table – above even China.

More than a quarter of those cases are in New York City, now a global center of the coronavirus pandemic, with New Orleans also raising alarm. Nationally, 1,301 people have died.

Most worryingly, the curve of cases continues to rise precipitously, with no sign of the plateau that has spared South Korea.

“The US response will be studied for generations as a textbook example of a disastrous, failed effort,” Ron Klain, who spearheaded the fight against Ebola in 2014, told a Georgetown university panel recently. “What’s happened in Washington has been a fiasco of incredible proportions.”

Jeremy Konyndyk, who led the US government’s response to international disasters at USAid from 2013 to 2017, frames the past six weeks in strikingly similar terms. He told the Guardian: “We are witnessing in the United States one of the greatest failures of basic governance and basic leadership in modern times.”

In Konyndyk’s analysis, the White House had all the information it needed by the end of January to act decisively. Instead, Trump repeatedly played down the severity of the threat, blaming China for what he called the “Chinese virus” and insisting falsely that his partial travel bans on China and Europe were all it would take to contain the crisis.