Athletes often don’t know what they’re talking about (Apparently, neither do Presidents) 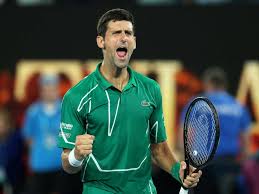 This is what happens when we depend on celebrities to amplify good advice. The ones who have bad advice will feel similarly empowered. You can see where this particular case slid off the rails.

Djokovic has spent years trying to curate an identity as a sports brand. Early on, he tried the Tiger Beat route, a la Rafael Nadal. When that didn’t work, he tried haughty and detached, a la Roger Federer. Same result.

Some time around 2010, Djokovic decided to go Full Weirdo. He gave up gluten, got into cosmology and decided to present himself as a sort of seeker of universal truths. He even let everyone know that he’d been visiting a Buddhist temple during Wimbledon because … well, who knows what enlightenment and winning at tennis have to do with each other?

Nobody really got his new act, but this switch happened to coincide with Djokovic’s rise to the top. So he stuck with it.

This went hand in hand with an irrepressibly chirpy public persona, one so calculatedly ingratiating that it often had the opposite effect.

But it didn’t turn out for Djokovic. Even now that he is arguably the greatest men’s player of all time, he still can’t manage the trick. There’s just something about the guy that seems a bit not-of-this-world.