Better the Two Devils You Know, Than the One You Don’t: Predictability Influences Moral Judgment 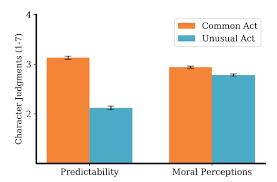 Across four studies (N =1,806 US residents), we demonstrate the role perceptions of predictability play in judgments of moral character, finding that less predictable agents were also judged as less moral. Participants judged agents performing an immoral action (e.g., assault) for an unintelligible reason as less predictable and less moral than agents performing the same immoral action for a well-understood immoral reason (Studies 1-3). Additionally, agents performing an action in an unusual way were judged as less predictable and less moral than those performing the same action in a common manner (Study 4). These results challenge monist theories of moral psychology, which reduce morality to a single dimension (e.g., harm) and pluralist accounts failing to consider the role predictability plays in moral judgments. We propose that predictability influences judgments of moral character for its ultimate role in facilitating cooperation and discuss how these findings may be accommodated by theories of morality-as-cooperation.

Supporting the idea that judgments of predictability guide judgments of moral character, we show that people judge agents they perceive as less predictable to be less moral. Those signalling unpredictability with their actions, either by acting without an intelligible motive(Studies 1-3)or by performing an immoral act in an unusual manner(Study 4), are consistently viewed as possessing an especially poor moral character.