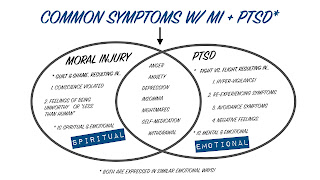 Though PTSD symptoms such as avoidance of reminders of the traumatic event and intrusive thought patterns may also be present in moral injury, they appear to serve different purposes, with PTSD sufferers avoiding fear and moral injury sufferers avoiding shame triggers. Few comparison studies of PTSD and moral injury exist, yet there has been research that indirectly compares the two conditions by differentiating between fear-based and non-fear-based (i.e., moral injury) forms of PTSD, which have been demonstrated to have different neurobiological markers. In the context of the military, there are countless examples of potentially morally injurious events (PMIEs), which can include killing or wounding others, engaging in retribution or disproportionate violence, or failing to save the life of a comrade, child or civilian. The experience of PMIEs has been demonstrated to lead to a larger range of psychological distress symptoms, including higher levels of guilt, anger, shame, depression and social isolation, than those seen in traditional PTSD profiles.

Guilt is difficult to address in therapy and often lingers following standardized PTSD treatment (that is, if the sufferer is able to access therapy). It may, in fact, be a factor in the more than 49 percent of veterans who drop out of evidence-based PTSD treatment or in why, at times, up to 72% of sufferers, despite meaningful improvement in their symptoms, do not actually recover enough after such treatment for their PTSD diagnosis to be removed. Most often, moral injury symptoms that are present in the clinic are addressed through traditional PTSD treatments, with thoughts of guilt and shame treated similarly to other distorted cognitions. When guilt and the events it relates to are treated as “a feeling and not a fact,” as psychologist Lisa Finlay put it in a 2015 paper, there is an attempt to lessen or relieve such emotions while taking a shortcut to avoid experiencing those that are legitimate and reasonable after-wartime activities. Continuing, Finlay stated that “the idea that we might get good, as a profession, at talking people out of guilt following their involvement in traumatic incidents is frighteningly short-sighted in more ways than one.”