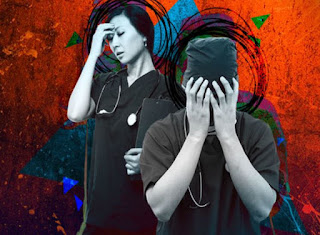 Moral injury, a term that originated in the military, can be defined as the psychological distress that results from actions, or the lack of them, which violate someone’s moral or ethical code.1 Unlike formal mental health conditions such as depression or post-traumatic stress disorder, moral injury is not a mental illness. But those who develop moral injuries are likely to experience negative thoughts about themselves or others (for example, “I am a terrible person” or “My bosses don’t care about people’s lives”) as well as intense feelings of shame, guilt, or disgust. These symptoms can contribute to the development of mental health difficulties, including depression, post-traumatic stress disorder, and even suicidal ideation. Equally, some people who have to contend with significant challenges, moral or traumatic, experience a degree of post-traumatic growth,3 a term used to describe a bolstering of psychological resilience, esteem, outlook, and values after exposure to highly challenging situations. Whether someone develops a psychological injury or experiences psychological growth is likely to be influenced by the way that they are supported before, during, and after a challenging incident.

Moral injury has already been described in medical students, who report great difficulty coping with working in prehospital and emergency care,4 where they were exposed to trauma that they felt unprepared for. This may be similar to the unprecedented nature of the challenges healthcare staff are currently facing. In the UK, most NHS staff may have felt, with some justification, that with all its faults, the NHS gives the sickest people the greatest chance of recovery. As such, staff should and usually do feel that it is something to be proud of.

The huge current effort to ensure adequate staffing and resources may be successful, but it looks likely that during the covid-19 outbreak many healthcare workers will encounter situations where they cannot say to a grieving relative, “We did all we could” but only, “We did our best with the staff and resources available, but it wasn’t enough.” That is the seed of a moral injury. Not all staff members will be adversely affected by the challenges ahead (table 1) but no one is invulnerable, and some healthcare workers will hurt, perhaps for a long time, unless we begin now to prepare and support our staff.