In this election, ‘costly signal deployment’ 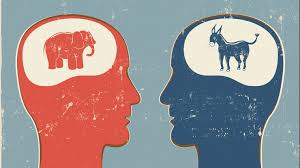 Trump isn’t merely saying things that his base likes to hear. All politicians do that, and to the extent that they can do so honestly, that’s exactly what they are supposed to do. But Trump does more than this in his use of “costly signals.” A tattoo is a costly signal. You can tell your romantic partner that you love them, but there’s nothing stopping you from changing your mind the next day. But if you get a tattoo of your partner’s name, you’ve sent a much stronger signal about how committed you are. Likewise, a gang tattoo binds you to the gang, especially if it’s in a highly visible place such as the neck or the face. It makes you scary and unappealing to most people, limiting your social options, and thus, binding you to the gang. Trump’s blatant bigotry, misogyny, and incitements to violence make him completely unacceptable to liberals and moderates. And, thus, his comments function like gang tattoos. He’s not merely saying things that his supporters want to hear. By making himself permanently and unequivocally unacceptable to the opposition, he’s “proving” his loyalty to their side. This is why, I think, the Republican base trusts Trump like no other.

There is costly signaling on the left, but it’s not coming from Biden, who is trying to appeal to as many voters as possible. Bernie Sanders is a better example. Why does Bernie Sanders call himself a socialist? What he advocates does not meet the traditional dictionary definition of socialism. And politicians in Europe who hold similar views typically refer to themselves as “social democrats” rather than “democratic socialists.” “Socialism” has traditionally been a scare word in American politics. Conservatives use it as an epithet to describe policies such as the Affordable Care Act, which, ironically, is very much a market-oriented approach to achieving universal health insurance. It’s puzzling, then, that a politician would choose to describe himself with a scare word when he could accurately describe his views with less-scary words. But it makes sense if one thinks of this as a costly signal. By calling himself a socialist, Sanders makes it very clear where his loyalty lies, as vanishingly few Republicans would support someone who calls himself a socialist.

The interview is here.