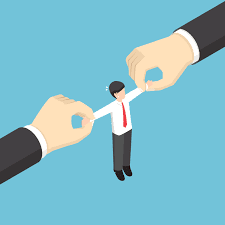 The primary claim of this paper is that intellectual conflicts of interest (COIs) exist but are of lower ethical priority than COIs flowing from relationships between health professionals and commercial industry characterized by financial exchange. The paper begins by defining intellectual COIs and framing them in the context of scholarship on non-financial COIs. However, the paper explains that the crucial distinction is not between financial and non-financial COIs but is rather between motivations for bias that flow from relationships and those that do not. While commitments to particular ideas or perspectives can cause all manner of cognitive bias, that fact does not justify denying the enormous power that relationships featuring pecuniary gain have on professional behaviour in term of care, policy, or both. Sufficient reason exists to take both intellectual COIs and financial COIs seriously, but this paper demonstrates why the latter is of higher ethical priority. Multiple reasons will be provided, but the primary rationale grounding the claim is that intellectual COIs may provide reasons to suspect cognitive bias but they do not typically involve a loss of trust in a social role. The same cannot be said for COIs flowing from relationships between health professionals and commercial industries involving financial exchange. The paper then assumes arguendo that the primary rationale is mistaken and proceeds to show why the claims that intellectual COIs are more significant than relationship-based COIs are dubious on their own merits. The final section of the paper summarizes and concludes.

iCOIs exist and they should be taken seriously. Nevertheless, fCOIs are of greater ethical priority. The latter diminish trust in a social role to a much greater extent than do the former, at least in the broad run of cases. Moreover, it is not clear how providers could avoid developing intellectual commitments and preferences regarding particular therapeutic modalities or interventions—and even if we could prevent this from occurring, it is far from evident that we should. We can easily imagine cases where a studied determination to remain neutral regarding interventions would be an abdication of moral responsibility, would be decidedly unvirtuous, and would likely result in harm to care- and service-seekers. While we also have evidence that some intellectual commitments can motivate bias in ways that likely result in harm to care- or service-seekers, this premise only justifies taking iCOIs seriously—it is literally no argument for deprioritizing fCOIs. Although the fact that iCOIs are in many cases unavoidable is a weak justification for ignoring iCOIs, the comparable avoidability of the vast majority of fCOIs is indeed a reason for prioritizing the latter over the former.

A pdf is here.