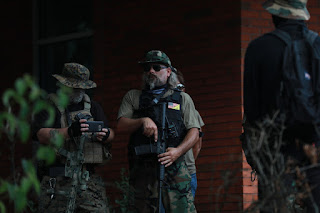 Why would I say that Christians are celebrating Rittenhouse? For one thing, a Christian crowdfunding site has raised more than $450,000 for his legal defense. Christian writers have called him a “good Samaritan” and argued that he’s a “decent, idealistic kid who entered that situation with the desire to do good, and, in fact, did do good.” (Emphasis added.)

Rittenhouse’s case comes on the heels of the Republican decision to showcase Mark and Patricia McCloskey at the Republican National Convention, the St. Louis couple that has been criminally charged for brandishing weapons at Black Lives Matter protesters who were marching outside their home.

The McCloskeys are obviously entitled to a legal defense, and I am not opining on the legal merits of their case (again, there is much we don’t know), but as a gun-owner, I cringed at their actions. They weren’t heroic. They were reckless. Pointing a weapon at another human being is a gravely serious act. It’s inherently dangerous, and if done unlawfully it often triggers in its targets an immediate right of violent (and potentially deadly) self-defense.

At the same time, we’re seeing an increasing number of openly-armed, rifle-toting conservative vigilantes not just aggressively confronting far-left crowds in the streets, but also using their weapons to intimidate lawmakers into canceling a legislative session.

In other words, we are watching gun-owners, sometimes cheered on by Christian conservatives, breaking the social compact. They aren’t exercising their rights responsibly, they’re pushing them to the (sometimes literally) bleeding edge, pouring gasoline on a civic fire, and creating real fear in their fellow citizens.

This is exactly when a healthy conservative Christian community rises up and quite simply says, “No.” With one voice it condemns vigilantism and models civic responsibility.