The Panopticon Is Already Here 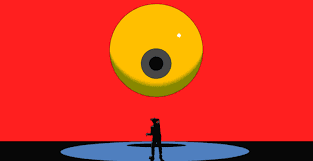 China is an ideal setting for an experiment in total surveillance. Its population is extremely online. The country is home to more than 1 billion mobile phones, all chock-full of sophisticated sensors. Each one logs search-engine queries, websites visited, and mobile payments, which are ubiquitous. When I used a chip-based credit card to buy coffee in Beijing’s hip Sanlitun neighborhood, people glared as if I’d written a check.

All of these data points can be time-stamped and geo-tagged. And because a new regulation requires telecom firms to scan the face of anyone who signs up for cellphone services, phones’ data can now be attached to a specific person’s face. SenseTime, which helped build Xinjiang’s surveillance state, recently bragged that its software can identify people wearing masks. Another company, Hanwang, claims that its facial-recognition technology can recognize mask wearers 95 percent of the time. China’s personal-data harvest even reaps from citizens who lack phones. Out in the countryside, villagers line up to have their faces scanned, from multiple angles, by private firms in exchange for cookware.

Until recently, it was difficult to imagine how China could integrate all of these data into a single surveillance system, but no longer. In 2018, a cybersecurity activist hacked into a facial-recognition system that appeared to be connected to the government and was synthesizing a surprising combination of data streams. The system was capable of detecting Uighurs by their ethnic features, and it could tell whether people’s eyes or mouth were open, whether they were smiling, whether they had a beard, and whether they were wearing sunglasses. It logged the date, time, and serial numbers—all traceable to individual users—of Wi-Fi-enabled phones that passed within its reach. It was hosted by Alibaba and made reference to City Brain, an AI-powered software platform that China’s government has tasked the company with building.

City Brain is, as the name suggests, a kind of automated nerve center, capable of synthesizing data streams from a multitude of sensors distributed throughout an urban environment. Many of its proposed uses are benign technocratic functions. Its algorithms could, for instance, count people and cars, to help with red-light timing and subway-line planning. Data from sensor-laden trash cans could make waste pickup more timely and efficient.