Poll: Most Americans believe the Covid-19 vaccine approval process is driven by politics, not science

Seventy-eight percent of Americans worry the Covid-19 vaccine approval process is being driven more by politics than science, according to a new survey from STAT and the Harris Poll, a reflection of concern that the Trump administration may give the green light to a vaccine prematurely.

The response was largely bipartisan, with 72% of Republicans and 82% of Democrats expressing such worries, according to the poll, which was conducted last week and surveyed 2,067 American adults.

The sentiment underscores rising speculation that President Trump may pressure the Food and Drug Administration to approve or authorize emergency use of at least one Covid-19 vaccine prior to the Nov. 3 election, but before testing has been fully completed.

Concerns intensified in recent days after Trump suggested in a tweet that the FDA is part of a “deep state” conspiracy to sabotage his reelection bid. In a speech Thursday night at the Republican National Convention, he pledged that the administration “will produce a vaccine before the end of the year, or maybe even sooner.”

Please see top line: 80% of Americans surveyed worry that approving vaccine too quickly would worry about safety.  The implication is that fewer people would choose the vaccine if safety is an issue. 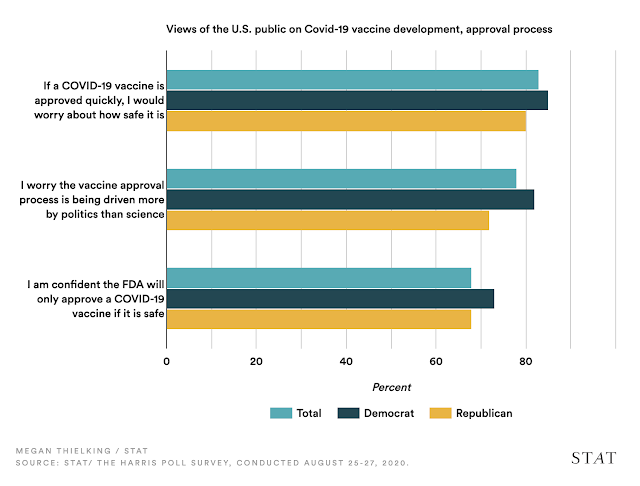