Pharma drew a line in the sand over Covid-19 vaccine readiness, because someone had to 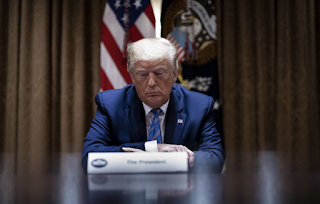 The vaccine makers that are signing this pledge — Pfizer, Merck, AstraZeneca, Sanofi, GlaxoSmithKline, BioNTech, Johnson & Johnson, Moderna, and Novavax — are rushing to complete clinical trials. But only Pfizer has indicated it may have late-stage results in October, and that’s not a given.

Yet any move by the FDA to green light a Covid-19 vaccine without late-stage results will be interpreted as an effort to boost Trump — and rightly so.

Consider Trump’s erratic and selfish remarks. He recently accused the FDA of slowing the vaccine approval process and being part of a “deep state.” No wonder there is concern he may lean on Hahn to authorize emergency use prematurely. For his part, Hahn has insisted he won’t buckle to political pressure, but he also said emergency use may be authorized based on preliminary data.

“It’s unprecedented in my experience that industry would do something like this,” said Ira Loss of Washington Analysis, who tracks pharmaceutical regulatory and legislative matters for investors. “But we’ve experienced unprecedented events since the beginning of Covid-19, starting with the FDA, where the commissioner has proven to be malleable, to be kind, at the foot of the president.”

Remember, we’ve seen this movie before.

Amid criticism of his handling of the pandemic, Trump touted hydroxychloroquine, a decades-old malaria tablet, as a salve and the FDA authorized emergency use. Two weeks ago, he touted convalescent blood plasma as a medical breakthrough, but evidence of its effectiveness against the coronavirus is inconclusive. And Hahn initially overstated study results.

Most Americans seem to be catching on. A STAT-Harris poll released last week found that 78% of the public believes the vaccine approval process is driven by politics, not science. This goes for a majority of Democrats and Republicans.