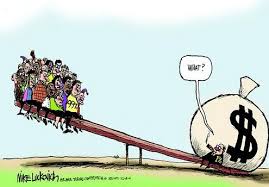 As economic inequality grows, more people stand to benefit from wealth redistribution. Yet in many countries, increasing inequality has not produced growing support for redistribution, and people often appear to vote against their economic interest. Here we suggest that two cognitive tendencies contribute to these paradoxical voting patterns. First, people gauge their income through social comparison, and those comparisons are usually made to similar others. Second, people are insensitive to large numbers, which leads them to underestimate the gap between themselves and the very wealthy. These two tendencies can help explain why subjective income is normally distributed (therefore most people think they are middle class) and partly explain why many people who would benefit from redistribution oppose it. We support our model’s assumptions using survey data, a controlled experiment, and agent-based modeling. Our model sheds light on the cognitive barriers to reducing inequality.

These findings emphasize a new perspective on inequality. In addition to institutional drivers of inequality, our studies outline several cognitive constraints on people’s calculation of their support for wealth redistribution. By relying partly on subjective income to determine whether redistribution is in their interest, people leave themselves open to the effects of selective social comparison and insensitivity to large numbers. These cognitive tendencies help explain why most people believe they are middle class, occupying the middle of a bell-shaped distribution of SES, despite the extreme skew present in actual income distributions.

Both of these problems can potentially be mitigated. Accessible resources that help people learn whether they will benefit from wealth redistribution could help people select economic policies that are in their best interest. On a larger scale, reducing residential segregation or otherwise increasing inter-group contact across social class lines could facilitate more representative social comparisons, and more accurate judgments of economic self-interest.

Attitudes about redistribution are not the only influences on people’s voting decisions and contribute to rising inequality. Institutional factors like gerrymandering may distort voting outcomes, and social factors such as moral and intergroup values may lead people to vote against their economic interests in favor of symbolic or group interests.

A pdf can be found here.
Italics added.