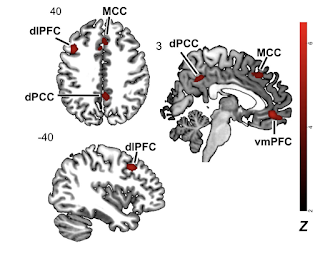 Prosocial behaviors are hypothesized to require socio-cognitive and empathic abilities—engaging brain regions attributed to the mentalizing and empathy brain networks. Here, we tested this hypothesis with a coordinate-based meta-analysis of 600 neuroimaging studies on prosociality, mentalizing and empathy (∼12,000 individuals). We showed that brain areas recruited by prosocial behaviors only partially overlap with the mentalizing (dorsal posterior cingulate cortex) and empathy networks (middle cingulate cortex). Additionally, the dorsolateral and ventromedial prefrontal cortices were preferentially activated by prosocial behaviors. Analyses on the functional connectivity profile and functional roles of the neural patterns underlying prosociality revealed that in addition to socio-cognitive and empathic processes, prosocial behaviors further involve evaluation processes and action planning, likely to select the action sequence that best satisfies another person’s needs. By characterizing the multidimensional construct of prosociality at the neural level, we provide insights that may support a better understanding of normal and abnormal social cognition (e.g., psychopathy).

• Our meta-analysis provides only partial support to this proposal.

• However, they also engage brain regions associated with evaluation and planning.

Taken together, we found a set of brain regions that were consistently activated by prosocial behaviors. These activation patterns partially overlapped with mentalizing and empathy brain regions, lending support to the hypothesis based on psychological research that socio-cognitive and empathic abilities are central to prosociality. However, we also found that the vmPFC and, in particular, the dlPFC were preferentially recruited by prosocial acts, suggesting that prosocial behaviors require the involvement of other important processes. Analyses on their functional connectivity profile and functional roles suggest that the vmPFC and dlPFC might be involved in valuation and planning of prosocial actions, respectively. These results clarify the role of mentalizing and empathic abilities in prosociality and provides useful insights into the neuropsychological processes underlying human social behaviors. For instance, they might help understand where and how things go awry in different neural and behavioral disorders such as psychopathy and antisocial behavior (Blair, 2007).