Fallen Soldier Insults Give Trump a Lot to Fear 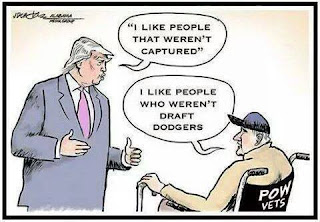 Building on Haidt’s work, Harvard economist Benjamin Enke has studied the rhetoric of numerous recent presidential candidates, and found that one has done better than all others in emphasizing loyalty, authority and sanctity: Trump. On the same scales, Hillary Clinton was especially bad. (Barack Obama was far better.) Enke also found that Trump’s emphasis on these values mattered to many voters, and attracted them to his side.

This framework helps sort out what many people consider to be a puzzle: Trump avoided military service, has been married three times, and has not exactly been a paragon of virtue in his personal life. Yet many people focused on patriotism, religious faith and traditional moral values have strongly supported him. A key reason is that however he has lived his life, he speaks their language — and indeed does so at least as well as, and probably better than, any presidential candidate they have heard before.

That’s why his reported expressions of contempt and disrespect for American soldiers threaten to be uniquely damaging — far more so than other outrageous comments he has made. When he said that Mexico is sending rapists to the U.S., made fun of the looks of prominent women, mocked disabled people, or said that protesters should be roughed up, people might have nodded or cringed, or laughed or been appalled.

As a matter of pure politics, though, saying that soldiers are “losers” or “suckers” is much worse for Trump because it attacks the foundation of his appeal: However he lives his life, at least he expresses deep love for this country and reverence for those who fight for it, and at least he speaks out for traditional moral values.

There are strong lessons here for both Trump and his Democratic challenger, former Vice President Joe Biden. Through both word and deed, the president needs to do whatever he can to make it clear that he respects and supports American soldiers.