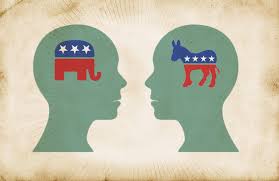 What determines our views on taxation and crime, healthcare and religion, welfare and gender roles? And why do opinions about these seemingly disparate aspects of our social lives coalesce the way they do? Research over the last 50 years has suggested that political attitudes and values around the globe are shaped by two ideological dimensions, often referred to as economic and social conservatism. However, it remains unclear why this ideological structure exists. Here, we highlight the striking concordance between these two dimensions of ideology and two key aspects of human sociality: cooperation and group conformity. Humans cooperate to a greater degree than our great ape relatives, paying personal costs to benefit others. Humans also conform to group-wide social norms and punish norm violators in interdependent, culturally marked groups. Together, these two shifts in sociality are posited to have driven the emergence of large-scale complex human societies. We argue that fitness trade-offs and behavioural plasticity have maintained strategic individual differences in both cooperation and group conformity, naturally giving rise to the two dimensions of political ideology. Supported by evidence from psychology, behavioural genetics, behavioural economics, and primatology, this evolutionary framework promises novel insight into the biological and cultural basis of political ideology.