One Nation Under Guard 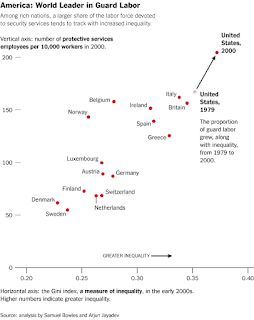 What is happening in America today is both unprecedented in our history, and virtually unique among Western democratic nations. The share of our labor force devoted to guard labor has risen fivefold since 1890 — a year when, in case you were wondering, the homicide rate was much higher than today.

Is this the curse of affluence? Or of ethnic diversity? We don’t think so. The guard-labor share of employment in the United States is four times what it is in Sweden, where living standards rival America’s. And Britain, with its diverse population, uses substantially less guard labor than the United States.

In America, growing inequality has been accompanied by a boom in gated communities and armies of doormen controlling access to upscale apartment buildings. We did not count the doormen, or those producing the gates, locks and security equipment. One could quibble about the numbers; we have elsewhere adopted a broader definition, including prisoners, work supervisors with disciplinary functions, and others.

But however one totes up guard labor in the United States, there is a lot of it, and it seems to go along with economic inequality. States with high levels of income inequality — New York and Louisiana — employ twice as many security workers (as a fraction of their labor force) as less unequal states like Idaho and New Hampshire.

When we look across advanced industrialized countries, we see the same pattern: the more inequality, the more guard labor. As the graph shows, the United States leads in both.