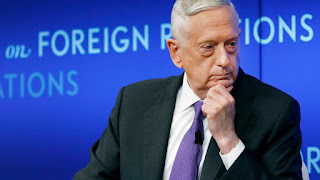 The president recently threatened to use our active duty military to “dominate” demonstrators nationwide, who are exercising their wholly legitimate right to assemble and be heard.

The distinguished former Secretary of Defense Jim Mattis nailed it in his recent broadside published in The Atlantic that took aim at our current commander-in-chief. Mattis states, “When I joined the military, some 50 years ago … I swore an oath to support and defend the Constitution. Never did I dream that troops taking the same oath would be ordered under any circumstances to violate the constitutional rights of their fellow citizens—much less to provide a bizarre photo op for the elected commander-in-chief, with military leadership standing alongside.”

The current Secretary of Defense, Mike Esper, who now perhaps regrets being made into a photographic prop for the president, has come out publicly against using the active duty military to quell civil unrest in our cities; as has 89 high ranking former defense officials who stated that they were “alarmed” by the chief executive’s threat to use troops against our country’s citizens on U.S. soil. Former Secretary of State Colin Powell, a former U.S. Army general and Republican Party member, has also taken aim at this presidency by stating that he will vote for Joe Biden in the next election.