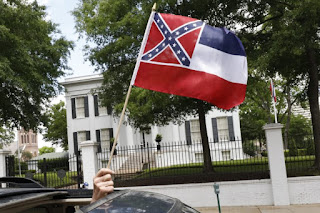 The powerful Mississippi Baptist Convention on Tuesday called for state leaders to change the Mississippi flag, with its Confederate battle emblem in one corner.

“It has become apparent that the discussion about changing the flag of Mississippi is not merely a political issue,” Baptist leaders said in a statement. “… The racial overtones of the flag’s appearance make this discussion a moral issue. Since the principal teachings of Scripture are opposed to racism, a stand against such is a matter of biblical morality.”

The convention includes about 2,100 churches in Mississippi, and Baptists are the largest denomination in the state, with over 500,000 members. Leaders said their stance on the flag doesn’t represent every member church, but they believe it represents a majority and asked for “Mississippi Baptists to make this a matter of prayer and to seek the Lord’s guidance in standing for love instead of oppression, unity instead of division, and the gospel of Christ instead of the power of this world.”

The convention’s statement said: “Given the moral and spiritual nature of this issue, Mississippi Baptist leaders offer prayers for our state officials to have wisdom, courage and compassion to move forward. We encourage our governor and state Legislature to take the necessary steps to adopt a new flag for the state of Mississippi that represents the dignity of every Mississippian and promotes unity rather than division.”