These are the Decade’s Biggest Discoveries in Human Evolution 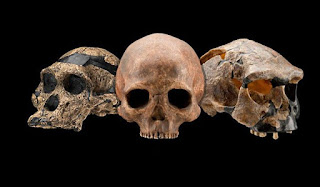 We’re older than we thought

Stone tools aren’t the only things that are older than we thought. Humans are too.

Just three years ago, a team of scientists made a discovery that pushed back the origin of our species, Homo sapiens. The team re-excavated a cave in Morocco where a group of miners found skulls in 1961. They collected sediments and more fossils to help them identify and date the remains. Using CT scans, the scientists confirmed that the remains belonged to our species. They also used modern dating techniques on the remains. To their surprise, the remains dated to about 300,000 years ago, which means that our species originated 100,000 years earlier than we thought.

In 2018, scientists discovered that social networks were used to trade obsidian, valuable for its sharp edges, by around 300,000 years ago. After excavating and analyzing stone tools from southern Kenya, the team found that the stones chemically matched to obsidian sources in multiple directions of up to 55 miles away. The findings show how early humans related to and kept track of a larger social world.

We left Africa earlier than we thought

We’ve long known that early humans migrated from Africa not once but at least twice. But we didn’t know just how early those migrations happened.