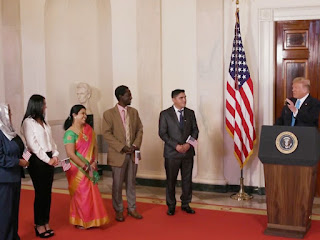 As part of Tuesday night's prime-time convention programming, Trump granted a presidential pardon from the White House. Secretary of State Mike Pompeo appeared from Jerusalem, where he was on official state business, to make a campaign speech with the Old City as backdrop. First lady Melania Trump delivered a speech from the White House Rose Garden. And acting Homeland Security Secretary Chad Wolf performed a naturalization ceremony on television as Trump looked on.

"The Hatch Act was the wall standing between the government's might and candidates. Tonight a candidate tore down that wall and wielded power for his own campaign," tweeted Walter Shaub, the former head of the U.S. Office of Government Ethics. Shaub left the office in 2017 after clashing with the Trump administration over the president's failure to divest from his businesses.

This summer, Pompeo and top State Department officials sent memos to employees reminding them they must be careful to adhere to the Hatch Act. Another memo said, "Senate-confirmed Presidential appointees may not even attend a political party convention or convention-related event." That description also applies to Pompeo.

Richard Haass, the longtime president of the Council on Foreign Relations who has served in several Republican administrations, said it's inappropriate for a secretary of state to appear at a political convention while serving as the nation's top diplomat.