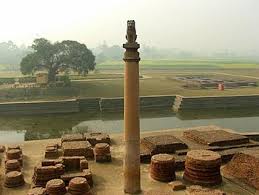 At the heart of Ashoka’s ethical project is a concern to bring other beings and their possibilities into view. Consider different ways in which living beings might be excluded from our regard. For example, it is only when we see animals as entirely outside of our moral and political community that it’s possible to see them as meat. In the edicts, we find a concern with how the incarcerated, for greater or lesser periods of time, can also fall out of our consideration as fellow members of our moral community. Housed out of sight, we don’t see them, just as in a metaphorical sense we fail to see them when we treat them as less than us.

As an antidote, Ashoka encouraged his bureaucrats to develop a moral responsiveness with respect to the incarcerated. He says that if his ministers think ‘This one has a family to support,’ or ‘This one has been bewitched,’ or ‘This one is old,’ then they will see them anew, and can work to rehabilitate and reintegrate such a reconsidered prisoner in society. The challenge, Ashoka suggests, begins in our imagination: we must learn to see them entire. In fact, in the case of prisoners, refugees from war, internally displaced peoples, and animals – vulnerable beings, all – Ashoka recommends an imaginative experiment: to see them as individuals who maintain and value relationships with others of their kind, if not with us.

And that is key. The logic of Ashoka’s proscriptions on hunting, fishing and cruelty in animal husbandry in his fifth-pillar inscription can show us why. There, Ashoka suggests that living beings require a secure place in which to thrive, and that different types of places suit different types of beings (such as forests, rivers, or even husks for small-scaled life). He implies that all living beings exhibit different kinds of vulnerabilities and opportunities at various stages of life or at different times of the year (as when fish spawn only in certain lunar months, or sows are in milk). Living beings have patterns of dependency without which they would not be able to survive. By virtue of being a necessity for the flourishing of life, each context, pattern or stage of dependency acquires a moral status.