A Psychological Exploration of Zoom Fatigue 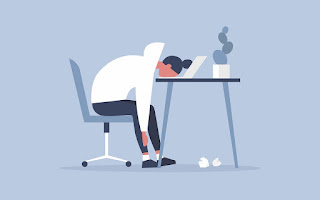 This neuropathophysiology may explain other proposed reasons for Zoom fatigue. For example, if the audio delays inherent in Zoom technology are associated with more negative perceptions and distrust between people, there is likely decreased reward perceived when those people are videoconferencing with each other. Another example is direct mutual gaze. There is robust evidence on how eye contact improves connection—faster responses, more memorization of faces, and increased likeability and attractiveness. These tools of social bonding that make interactions organically rewarding are all compromised over video. On video, gaze must be directed at the camera to appear as if you are making eye contact with an observer, and during conferences with 3 or more people, it can be impossible to distinguish mutual gaze between any 2 people.

Not only are rewards lessened via these social disconnections during videoconferencing compared to in-person interactions, but there are also elevated costs in the form of cognitive effort. Much of communication is actually unconscious and nonverbal, as emotional content is rapidly processed through social cues like touch, joint attention, and body posture. These nonverbal cues are not only used to acquire information about others, but are also directly used to prepare an adaptive response and engage in reciprocal communication, all in a matter of milliseconds. However, on video, most of these cues are difficult to visualize, since the same environment is not shared (limiting joint attention) and both subtle facial expressions and full bodily gestures may not be captured. Without the help of these unconscious cues on which we have relied since infancy to socioemotionally assess each other and bond, compensatory cognitive and emotional effort is required. In addition, this increased cost competes for people’s attention with acutely elevated distractions such as multitasking, the home environment (eg, family, lack of privacy), and their mirror image on the screen. Simply put, videoconferences can be associated with low reward and high cost.