Americans want ‘moral, ethical’ president more than a religious one 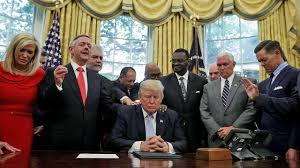 Democrats were more likely than Republicans to say the personal morality and ethical behavior of a president matters. Among Democrats, 71% said this is “very important,” compared to 53% of Republicans.

However, Republicans were nearly three times more likely than Democrats to say it is important that a president share their own religious beliefs.

White evangelical Christians top the chart on seeing Trump as at least “somewhat religious,” a view held by 64% of this group, compared to only 35% of all Americans. Within that group, only 12% of white evangelicals believe Trump is “very religious.”

Pew Center research also discovered that while white evangelical Protestants may not see Trump as “moral and ethical,” they believe their own views of the world are “winning” with Trump’s leadership.

In this latest survey, 83% of white evangelicals identified with the Republican Party, which could be one factor in believing their side is winning. Other polling indicates that Trump’s policies — such as restrictions on immigration and attempts to preserve Confederate monuments — play a role in this assessment too.