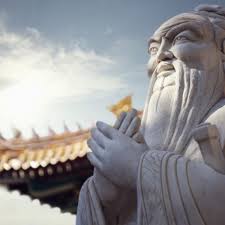 Empirical studies have suggested that language-capable robots have the persuasive power to shape the shared moral norms based on how they respond to human norm violations. This persuasive power presents cause for concern, but also the opportunity to persuade humans to cultivate their own moral development. We argue that a truly socially integrated and morally competent robot must be willing to communicate its objection to humans’ proposed violations of shared norms by using strategies such as blame-laden rebukes, even if doing so may violate other standing norms, such as politeness. By drawing on Confucian ethics, we argue that a robot’s ability to employ blame-laden moral rebukes to respond to unethical human requests is crucial for cultivating a flourishing “moral ecology” of human–robot interaction. Such positive moral ecology allows human teammates to develop their own moral reflection skills and grow their own virtues. Furthermore, this ability can and should be considered as one criterion for assessing artificial moral agency. Finally, this paper discusses potential implications of the Confucian theories for designing socially integrated and morally competent robots.