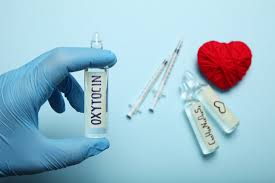 In recent years, conflicting findings have been reported in the scientific literature about the influence of dopaminergic, serotonergic and oxytocinergic gene variants on moral behavior. Here, we utilized a moral judgment paradigm to test the potential effects on moral choices of three polymorphisms of the Oxytocin receptor (OXTR): rs53576, rs2268498 and rs1042770. We analyzed the influence of each single polymorphism and of genetic profiles obtained by different combinations of their genotypes in a sample of male insurance brokers (n = 129), as compared to control males (n = 109). Insurance brokers resulted significantly more oriented to maximize outcomes than control males, thus they expressed more than controls the utilitarian attitude phenotype. When analyzed individually, none of the selected variants influenced the responses to moral dilemmas. In contrast, a composite genetic profile that potentially increases OXTR activity was associated with higher moral acceptability in brokers. We hypothesize that this genetic profile promotes outcome-maximizing behavior in brokers by focusing their attention on what represents a greater good, that is, saving the highest number of people, even though at the cost of sacrificing one individual. Our data suggest that investigations in a sample that most expresses the phenotype of interest, combined with the analysis of composite genetic profiles rather than individual variants, represent a promising strategy to find out weak genetic influences on complex phenotypes, such as moral behavior.

• Male insurance brokers as a sample to study utilitarian attitude.

• They are more aligned with utilitarianism than control males.

• Frequency of outcome-maximizing choices positively correlates with impulsivity in brokers.