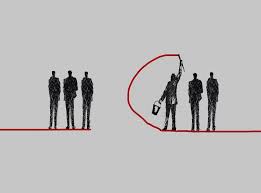 Across seven experiments and one survey (N=4282) people consistently overestimated out-group negativity towards the collective behavior of their in-group. This negativity bias in group meta-perception was present across multiple competitive (but not cooperative) intergroup contexts, and appears to be yoked to group psychology more generally; we observed negativity bias for estimation of out-group, anonymized-group, and even fellow in-group members’ perceptions. Importantly, in the context of American politics greater inaccuracy was associated with increased belief that the out-group is motivated by purposeful obstructionism. However, an intervention that informed participants of the inaccuracy of their beliefs reduced negative out-group attributions, and was more effective for those whose group meta-perceptions were more inaccurate. In sum, we highlight a pernicious bias in social judgments of how we believe ‘they’ see ‘our’ behavior, demonstrate how such inaccurate beliefs can exacerbate intergroup conflict, and provide an avenue for reducing the negative effects of inaccuracy.

Our findings highlight a consistent, pernicious inaccuracy in social perception, along withhow these inaccurate perceptions relate to negative attributions towards out-groups. More broadly, inaccurate and overly negative GMPs exist across multiple competitive intergroup contexts, and we find no evidence they differ across the political spectrum. This suggests that there may be many domains of intergroup interaction where inaccurate GMPs could potentially diminish the likelihood of cooperation and instead exacerbate the possibility of conflict. However, our findings also highlight a straight-forward manner in which simply informing individuals of their inaccurate beliefs can reduce these negative attributions.

A version of the research can be downloaded here.