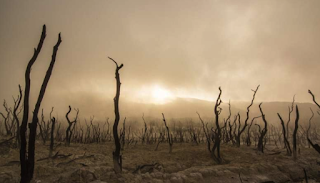 This call to collective moral and political responsibility is exactly right. As individuals, we can all be held accountable for helping to stop the undeniable environmental harms around us and the catastrophic threat posed by rising levels of CO2 and other greenhouse gases. Those of us with a degree of privilege and influence have an even greater responsibility to assist and advocate on behalf of those most vulnerable to the effects of global warming.

This group includes children everywhere whose futures are uncertain at best, terrifying at worst. It also includes those who are already suffering from severe weather events and rising water levels caused by global warming, and communities dispossessed by fossil fuel extraction. Indigenous peoples around the globe whose lands and water systems are being confiscated and polluted in the search for ever more sources of oil, gas and coal are owed our support and assistance. So are marginalized communities displaced by mountaintop removal and destructive dam energy projects, climate refugees and many others.

The message of climate activists is that we can't fulfill our responsibilities simply by making green choices as consumers or expressing support for their cause. The late American political philosopher Iris Young thought that we could only discharge our "political responsibility for injustice," as she put it, through collective political action.

The interests of the powerful, she warned, conflict with the political responsibility to take actions that challenge the status quo—but which are necessary to reverse injustices.

As the striking school children and older climate activists everywhere have repeatedly pointed out, political leaders have so far failed to enact the carbon emissions reduction policies that are so desperately needed. Despite UN Secretary General António Guterres' sombre words of warning at the Climate Action Summit, the UN is largely powerless in the face of governments that refuse to enact meaningful carbon-reducing policies, such as China and the U.S.