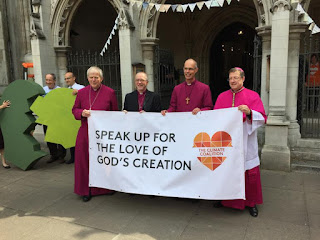 Using two nationally representative surveys (total N = 2,544) and two experiments (total N = 1,620), we investigate a social identity approach to engaging Christians in the issue of climate change. Results show Christian Americans say “protecting God’s creation” is a top reason for wanting to reduce global warming. An exploratory experiment and a preregistered replication tested a “stewardship frame” message with Christian Americans and found significant increases in pro-environmental and climate change beliefs, which were explained by increases in viewing environmental protection as a moral and religious issue, and perceptions that other Christians care about environmental protection.

Two studies using large diverse samples demonstrate that a social identity approach to engaging Christians in the issue of climate change is a promising strategy. In Study 1, in a combined sample of two nationally representative waves of survey data, we found that “protect God’s creation” is one of the most important motivations Christians report for wanting to mitigate global warming. This is important because it indicates that many Americans, and especially Christians, are willing to view climate change through a religious lens, and that messages that frame climate change as a religious issue could encourage greater engagement in the issue among this population.