At Stake in Reopening Schools: ‘The Future of the Country’ 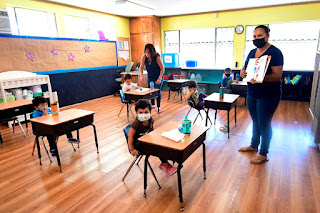 We do have to think about this longer-term. We also have to think about it from an ethics standpoint, acknowledging the following. At least right now, the primary motivation behind closing schools—having children not be educated in school buildings—is because of a belief that keeping schools physically open with children congregating poses a risk to community transmission. Either to teachers directly or back to households and the wider community. Whether it’s bad for kids themselves or how risky it is for kids themselves remains an open question. We’re worried about multisymptom inflammatory syndrome. But at least, right now, the evidence continues to suggest children are not themselves a particularly high risk group for serious Covid disease.

From an ethics point of view, when one group is being burdened primarily to benefit other groups, that puts a very special onus on justifying that it is ethically OK. If we conclude it is the right thing to do ethically because of what’s at stake for the community, we have both to make sure that it’s justified, this disproportionate burden on children, and that we do everything we can to mitigate those burdens.