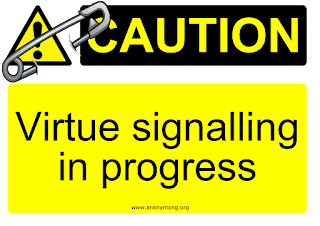 The accusation of virtue signalling is typically understood as a serious charge. Those accused usually respond (if not by an admission of fault) by attempting to show that they are doing no such thing. In this paper, I argue that we ought to embrace the charge, rather than angrily reject it. I argue that this response can draw support from cognitive science, on the one hand, and from social epistemology on the other. I claim that we may appropriately concede that what we are doing is (inter alia) virtue signalling, because virtue signalling is morally appropriate. It neither expresses vices, nor is hypocritical, nor does it degrade the quality of public moral discourse. Signalling our commitment to norms is a central and justifiable function of moral discourse, and the same signals provide (higher-order) evidence that is appropriately taken into account in forming moral beliefs.

The charge that someone is engaged in virtue signalling is widely felt to be a serious one. It is an accusation that stings. I hope we can now see that it should sting very much less. Virtue signalling is not an ir- or arational influence on belief formation. Rather, it provides (higher-order) evidence, which serves as an input into rational deliberation. Moreover, signalling is not a perversion of the central function of moral discourse. Independently of the role it plays in deliberation, signalling is a central function of public moral discourse, with an important role to play in enabling cooperation. Virtue signallers are not, in the main, hypocritical in their motivations and we have some grounds for thinking they are not dishonest in the signals they send.