Immunity to Covid-19 could be lost in months, UK study suggests 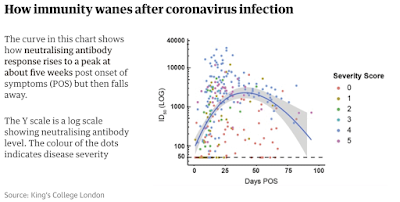 People who have recovered from Covid-19 may lose their immunity to the disease within months, according to research suggesting the virus could reinfect people year after year, like common colds.

In the first longitudinal study of its kind, scientists analysed the immune response of more than 90 patients and healthcare workers at Guy’s and St Thomas’ NHS foundation trust and found levels of antibodies that can destroy the virus peaked about three weeks after the onset of symptoms then swiftly declined.

Blood tests revealed that while 60% of people marshalled a “potent” antibody response at the height of their battle with the virus, only 17% retained the same potency three months later. Antibody levels fell as much as 23-fold over the period. In some cases, they became undetectable.

“People are producing a reasonable antibody response to the virus, but it’s waning over a short period of time and depending on how high your peak is, that determines how long the antibodies are staying around,” said Dr Katie Doores, lead author on the study at King’s College London.

The study has implications for the development of a vaccine, and for the pursuit of “herd immunity” in the community over time.

The immune system has multiple ways to fight the coronavirus but if antibodies are the main line of defence, the findings suggested people could become reinfected in seasonal waves and that vaccines may not protect them for long.