America’s Schools Are a Moral and Medical Catastrophe 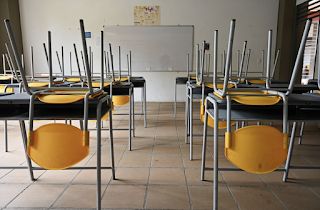 After U.S. President Donald Trump demanded last week that schools nationwide reopen this fall, regardless of the status of their community’s COVID-19 epidemic status, his Secretary of Education Betsy DeVos was asked how this could safely be accomplished. She offered no guidelines, nor financial support to strapped school districts. Her reply was that school districts nationwide needed to create their own safety schemes and realize that the federal government will cut off funds if schools fail to reopen. “I think the go-to needs to be kids in school, in person, in the classroom,” she said in an interview on CNN on July 12.

This is nothing short of moral bankruptcy. The Trump administration is effectively demanding schools bend to its will, without offering a hint of expert guidance on how to do so safely, much less the necessary financing.

I can’t correct for the latter failure, of course. But here’s some information that will be of use to the many rightfully concerned parents and educators across the United States.

1. Should a national-scale school reopening be considered, at all?

Emphatically, no. The state of Florida’s data shows that 13 percent of children who have been tested for the novel coronavirus were found to be infected, and there’s a gradient of infection downward with age: Only 16 percent of these positive cases are in children 1 to 4 years old, whereas 29 percent are in those 15 to 17 years old. In Nueces County, Texas, 85 children under age 2 have tested positive for the coronavirus since March, killing one of them. The infections were likely caught from parents or older siblings. A South Korean government survey of 60,000 households discovered that adults living in households that had an infected child aged 10 to 19 years had the highest rate of catching the coronavirus—more so than when an infected adult was present. Nearly 19 percent of people living with an infected teenager went on to test positive for the virus within 10 days. A Kaiser Family Foundation study says some 3.3 million adults over 65 in the United States live in a home with at least one school-aged child, putting the elders at special risk.