COVID-19 is more than a public health challenge: it's a moral test 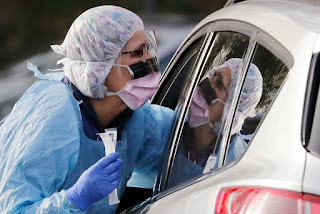 The time is already past to admit that the coronavirus pandemic in the United States is a moral crisis, not simply a public health and economic crisis.

While a certain amount of confusion back in February at the beginning of the crisis is understandable, today it is unforgivable. Bad leadership has cost thousands of lives and millions of jobs.

A large part of the failure has been in separating the economic crisis from the public health crisis when in fact they are intimately related. Until consumers and workers feel safe, the economy cannot revive. Nor should we take the stock market as the key measure of the country’s health, rather than the lives of ordinary people.

It can be difficult to see this as a moral crisis because what is needed is not heroic action, but simple acts that everyone must do. People simply need to wear masks, keep social distance and wash their hands. Employers need to provide working conditions where that is possible.

These are practices that public health experts have taught for decades. Too many in the United States have ignored them. Warnings about masks, for example, have been ignored.

For its part, government needs to enforce these measures, expand testing on a massive scale, do contact tracing and help people isolate themselves if they test positive. Instead, government, especially at the federal level, has failed. Businesses, especially bars, restaurants and entertainment venues, have remained open or been reopened too soon.

That it is possible to do the right thing and control the virus is obvious from the examples of South Korea, Thailand, New Zealand, China, Vietnam, most of Europe, New York, Massachusetts and Connecticut.

There is also the sin of presumption of those who trust in God to protect them from the virus while doing nothing themselves. Those who left it to the Lord forgot that “God helps those who help themselves.” There is also an arrogance in seeing ourselves as different from other mortals like us. Areas where people insisted they were somehow immune to this “blue” big-city virus have now been hit with comparable or worse infection rates.