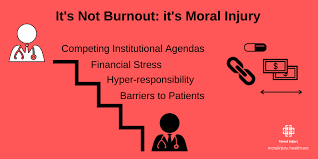 For more than a decade, the term burnout has been used to describe clinician distress. Although some clinicians in federal health care systems may be protected from some of the drivers of burnout, other federal practitioners suffer from rule-driven health care practices and distant, top-down administration. The demand for health care is expanding, driven by the aging of the US population. Massive information technology investments, which promised efficiency for health care providers, have instead delivered a triple blow: They have diverted capital resources that might have been used to hire additional caregivers, diverted the time and attention of those already engaged in patient care, and done little to improve patient outcomes. Reimbursements are falling, and the only way for health systems to maintain their revenue is to increase the number of patients each clinician sees per day. As the resources of time and attention shrink, and as spending continues with no improvement in patient outcomes, clinician distress is on the rise. It will be important to understand exactly what the drivers of the problem are for federal clinicians so that solutions can be appropriately targeted. The first step in addressing the epidemic of physician distress is using the most accurate terminology to describe it.

Freudenberger defined burnout in 1975 as a constellation of symptoms—malaise, fatigue, frustration, cynicism, and inefficacy—that arise from “making excessive demands on energy, strength, or resources” in the workplace. The term was borrowed from other fields and applied to health care in the hopes of readily transferring the solutions that had worked in other industries to address a growing crisis among physicians. Unfortunately, the crisis in health care has proven resistant to solutions that have worked elsewhere, and many clinicians have resisted being characterized as burned out, citing a subtle, elusive disconnect between what they have experienced and what burnout encapsulates.

In July 2018, the conversation about clinician distress shifted with an article we wrote in STAT that described the moral injury of health care. The concept of moral injury was first described in service members who returned from the Vietnam War with symptoms that loosely fit a diagnosis of posttraumatic stress disorder (PTSD), but which did not respond to standard PTSD treatment and contained symptoms outside the PTSD constellation. On closer assessment, what these service members were experiencing had a different driver. Whereas those with PTSD experienced a real and imminent threat to their mortality and had come back deeply concerned for their individual, physical safety, those with this different presentation experienced repeated insults to their morality and had returned questioning whether they were still, at their core, moral beings. They had been forced, in some way, to act contrary to what their beliefs dictated was right by killing civilians on orders from their superiors, for example. This was a different category of psychological injury that required different treatment.