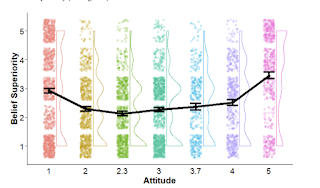 There is currently a debate in political psychology about whether dogmatism and belief superiority are symmetric or asymmetric across the ideological spectrum. One study found that dogmatism was higher amongst conservatives than liberals, but both conservatives and liberals with extreme attitudes reported higher perceived superiority of beliefs (Toner et al., 2013). In the current study, we conducted a pre-registered direct and conceptual replication of this previous research using a large nationally representative sample. Consistent with prior research, we found that conservatives had higher dogmatism scores than liberals while both conservative and liberal extreme attitudes were associated with higher belief superiority compared to more moderate attitudes. As in the prior research we also found that whether conservative or liberal attitudes were associated with higher belief superiority was topic dependent. Different from prior research, we found that ideologically extreme individuals had higher dogmatism. Implications of these results for theoretical debates in political psychology are discussed.