The Role of Passing Time in Decision-Making 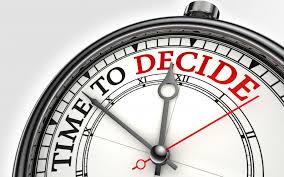 Theories of perceptual decision-making have been dominated by the idea that evidence accumulates in favor of different alternatives until some fixed threshold amount is reached, which triggers a decision. Recent theories have suggested that these thresholds may not be fixed during each decision, but change as time passes. These collapsing thresholds can improve performance in particular decision environments, but reviews of data from typical decision-making paradigms have failed to support collapsing thresholds. We designed three experiments to test collapsing threshold assumptions in decision environments specifically tailored to make them optimal. An emphasis on decision speed encouraged the adoption of collapsing thresholds – most strongly through the use of response deadlines, but also through instruction to a lesser extent – but setting an explicit goal of reward rate optimality through both instructions and task design did not. Our results provide a new explanation for previous findings regarding decision-making differences between humans and non-human primates.