Stressed Out at the Office? Therapy Can Come to You 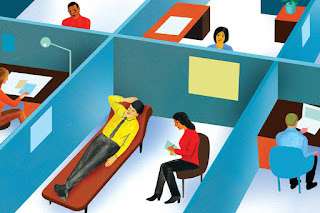 In the past, discussion of mental-health issues at the office was uncommon. Workers were largely expected to leave their personal struggles at home. Crying was confined to the bathroom stall.

Today, that’s changing. One reason is a broadening of the popular understanding of “mental health” to encompass anxiety, stress and other widespread issues.

It’s also a reflection of a changing workplace. Younger workers are more comfortable talking about their struggles and expect their employers to take emotional distress seriously, says Jeffrey Pfeffer, a professor of organizational behavior at the Stanford Graduate School of Business.

Senior leaders are responding, rolling out mental-health services and sometimes speaking about their own experiences. Lloyds Banking Group Plc chief executive António Horta-Osório has said publicly in recent years that the pressure he felt around the bank’s financial situation in 2011 dominated his thoughts, leaving him unable to sleep and exhausted. He took eight weeks off from the company to recover, working with a psychiatrist. The psychiatrist later helped him devise a mental-health program for Lloyds employees.

Brynn Brichet, a lead product manager at Cerner Corp., a maker of electronic medical-records systems, said she sometimes returns from her counseling appointments with an on-site therapist red-faced from crying. (The therapist sits a few floors down.) If colleagues ask, she tells them that she just got out of an intense therapy session. Some are taken aback when she mentions her therapy, she said. But she thinks it’s important to be open.

“We all are terrified. We all are struggling,” she said. “If we don’t talk about it, it can run our lives.”