When Medical Debt Collectors Decide Who Gets Arrested 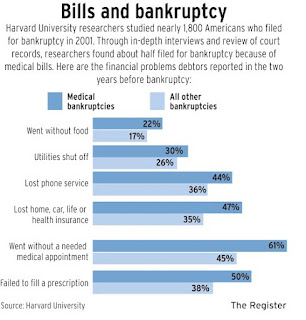 Across the country, thousands of people are jailed each year for failing to appear in court for unpaid bills, in arrangements set up much like this one. The practice spread in the wake of the recession as collectors found judges willing to use their broad powers of contempt to wield the threat of arrest. Judges have issued warrants for people who owe money to landlords and payday lenders, who never paid off furniture, or day care fees, or federal student loans. Some debtors who have been arrested owed as little as $28.

More than half of the debt in collections stems from medical care, which, unlike most other debt, is often taken on without a choice or an understanding of the costs. Since the Affordable Care Act of 2010, prices for medical services have ballooned; insurers have nearly tripled deductibles — the amount a person pays before their coverage kicks in — and raised premiums and copays, as well. As a result, tens of millions of people without adequate coverage are expected to pay larger portions of their rising bills.

The sickest patients are often the most indebted, and they’re not exempt from arrest. In Indiana, a cancer patient was hauled away from home in her pajamas in front of her three children; too weak to climb the stairs to the women’s area of the jail, she spent the night in a men’s mental health unit where an inmate smeared feces on the wall. In Utah, a man who had ignored orders to appear over an unpaid ambulance bill told friends he would rather die than go to jail; the day he was arrested, he snuck poison into the cell and ended his life.