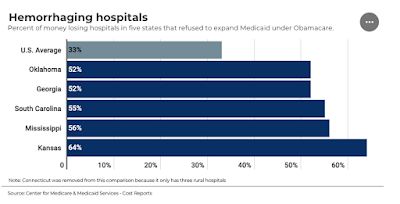 While experts agree embracing Obamacare is not a cure-all for rural hospitals and would not have saved many of those that closed, few believe it was wise to turn the money down.

The crisis facing rural America has been raging for decades and the carnage is not expected to end any time soon.

High rates of poverty in rural areas, combined with the loss of jobs, aging populations, lack of health insurance and competition from other struggling institutions will make it difficult for some rural hospitals to survive regardless of what government policies are implemented.

For some, there’s no point in trying. They say the widespread closures are the result of the free market economy doing its job and a continued shakeout would be helpful. But no rural community wants that shakeout to happen in its backyard.

“A hospital closure is a frightening thing for a small town,” said Patti Davis, president of the Oklahoma Hospital Association. “It places lives in jeopardy and has a domino effect on the community. Health care professionals leave, pharmacies can’t stay open, nursing homes have to close and residents are forced to rely on ambulances to take them to the next closest facility in their most vulnerable hours.”