The arc of the moral universe won't bend on its own 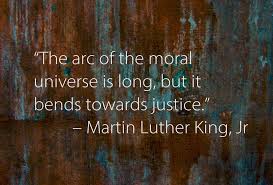 My favorite Martin Luther King Jr. quote -- one of 14 engraved on a monument to his legacy in Washington, D.C. -- is, "We shall overcome because the arc of the moral universe is long, but it bends toward justice."

I like that quote because I hope he was right. But do we have evidence to support that?

A man just drove for hours in order to kill people whose skin is a little darker and food a little spicier than his culture's. He opened fire in a mass shooting inspired by the words or politicians and pundits who stoke racist fears in order to win votes for their side. Calling groups of refugees invasions, infestations, or criminals and worrying about racial replacement are not the sentiments of a society whose moral arc is bending toward justice.

Racism isn't solved. White nationalists are not a hoax, and they are a big problem.

There are no spectators in this fight. You either condemn, condone or contribute to the problem.

Racism isn't a partisan issue. Both parties can come together to make these beliefs unacceptable in our society.

Another King quote from his Letter from a Birmingham Jail sums it up, "Injustice anywhere is a threat to justice everywhere. We are caught in an inescapable network of mutuality, tied in a single garment of destiny. Whatever affects one directly, affects all indirectly."

Rev. King was right about the moral arc of the universe bending toward justice, but it won't bend on its own. That's where we come in. We all have to do our part to make sure that our words and actions make racists uncomfortable.