Cultural evolution, Covid-19, and preparing for what’s next 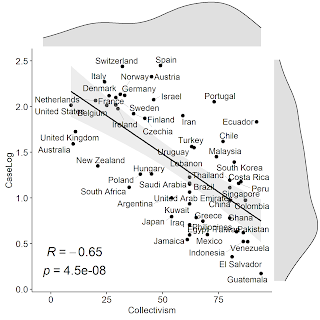 A recent analysis suggests that countries with efficient governments and tight, norm-enforcing cultures have the slowest rate of increase in Covid-19 cases adjusted for population size and the fewest deaths controlling for GDP per capita, inequality, and median age, weighting for time. Together, these explain 41% of the variance. Put another way, societies with institutions that advocate behaviours that reduce caseloads and citizens who conform to those behaviours are successful in managing this outbreak. Countries with institutions with behaviours that do not reduce caseloads and citizens who conform, and countries with institutions who advocate appropriate behaviours, but citizens who do not conform have worse outcomes. In addition to general government efficiency and a tendency to enforce norms, past research has implicated a package of behaviours classed as “collectivism” as having evolved as an adaptation to material insecurity, including pathogen prevalence, and other pressures that required avoiding individualistic behaviours that threatened the group welfare or challenges that required collective action. That is, collectivist cultures may have evolved a suite of behaviours that are well adapted to epidemics: less mouth-to-mouth romantic kissing and physical affection in general, more vigilance of others, even in-group members, social learning, conformity, obedience to authority, avoidance orientation, and so on. Indeed, a quick and dirty re-analysis of Gelfand et al’s models replacing tightness with collectivism, shows that collectivism alone predicts 36% of the variance, and together with the controls, predicts 48% of the variance (see Table 1).