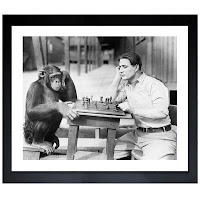 To answer tantalizing questions such as whether animals are moral or how morality evolved, I propose starting with a somewhat less fraught question: do animals have normative cognition? Recent psychological research suggests that normative thinking, or ought-thought, begins early in human development. Recent philosophical research suggests that folk psychology is grounded in normative thought. Recent primatology research finds evidence of sophisticated cultural and social learning capacities in great apes. Drawing on these three literatures, I argue that the human variety of social cognition and moral cognition encompass the same cognitive capacities and that the nonhuman great apes may also be normative beings. To make this argument, I develop an account of animal social norms that shares key properties with Cristina Bicchieri's account of social norms but which lowers the cognitive requirements for having a social norm. I propose a set of four early developing prerequisites implicated in social cognition that make up what I call naïve normativity: the ability to identify agents, sensitivity to in-group/out-group differences, the capacity for social learning of group traditions, and responsiveness to appropriateness. I review the ape cognition literature and present preliminary empirical evidence supporting the existence of social norms and naïve normativity in great apes. While there is more empirical work to be done, I hope to have offered a framework for studying normativity in other species, and I conclude that we should be open to the possibility that normative cognition is yet another ancient cognitive endowment that is not human-unique.