A pandemic plan was in place. Trump abandoned it - and science 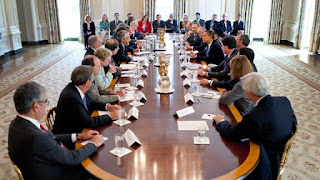 Beginning the morning after his inauguration, a spectacular science-related tragedy has unfolded. The Trump administration has systematically dismantled the executive branch’s science infrastructure and rejected the role of science to inform policy, essentially reversing both Republican and Democrat presidential administrations since World War II, when Vannevar Bush, an engineer, advised Presidents Franklin D. Roosevelt and Harry S. Truman.

President Trump’s pursuit of anti-science policy has been so effective that as the first cases of Covid-19 were breaking out in Wuhan, China, no meaningful science policy infrastructure was in place to advise him. As a consequence, America is suffering from a pandemic without a plan. Our responses are ineffectual and inconsistent. We are increasingly divided by misinformation and invidious messaging. And it’s not even over.

Facts will drive scientific decisions, not the other way around

On April 27, 2009, on the eve of his 100th day in office, Obama made a five-block trip from the White House to 2101 Constitution Ave. There, in the Great Hall of the National Academy of Sciences, he spoke about his administration’s commitment to science.

“Science is more essential for our prosperity, our security, our health, our environment, and our quality of life than it has ever been before,” he announced. He introduced the members of PCAST and explained how his administration would engage the scientific community directly in the work of public policy.

“I want to be sure that facts are driving scientific decisions — and not the other way around,” the president said. The audience broke into laughter.

Obama explained that his science advisers were already briefing him daily on the emerging threat of swine flu, which some were projecting could kill thousands of Americans.